How geeky am I?
Filed under:Personal,Software reviews at3:32 pm

Having bought a desktop PC (dubbed ‘playmate’) for (mostly) games and (partly) other applications like NVivo which don’t run on my iBook, I find that I have had to learn how to network between them inside the home. So now using VNC I can view my iBook’s screen in a window on my PC then when I have finished working on a file on my Mac I can use Windows Sharing to open my Mac’s filing system as if it were a drive on my PC and copy what I need across. I can even print to my printer in the study from my Mac in the living room. It’s like my Mac is somehow ‘inside’ my PC. Rather eerie – and I confess it makes me feel like I am finally catching up to the level of computer skill exhibited by some of my friends. Of course they have been doing this kind of thing for years…

Lest anyone tell you the academic life is all work…
Filed under:Personal,Travel at9:53 pm 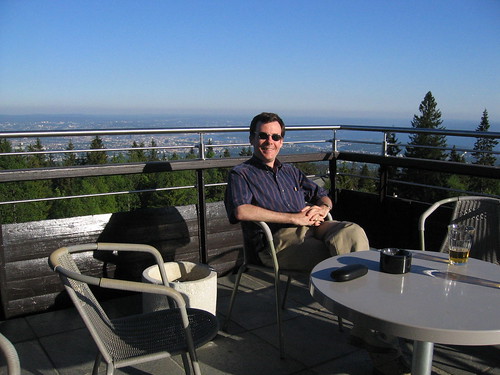 At the conference centre outside Oslo…

P.S. I never even dared to ask the price of alcohol while I was there – I had heard it was the priciest thing about Norway – but just before I left I asked the price of .5 L of beer in the airport bar – £6!

I was wandering the Astrup Fearnley Museum of Modern Art in Oslo getting pretty bored when what should I run across but The Paradise Institute by Janet Cardiff and Georges Bures Miller which was a tour de force of (predominantly) aural ingenuity (why don’t more music artists use binaural recording?). Imagine my surprise when it turned out they were both Canadians from Ontario (though now in Berlin I think?) If you get the chance to catch anything by them it would definitely be worthwhile.

Lovely to visit Oslo but suspect I could have trouble living here
Filed under:Personal,Travel at8:52 am

I visited Oslo to attend the first meeting of the Mediatized Stories network (which was a very interesting gathering of scholars from a wide variety of disciplines with a common interest in youth and digital storytelling), and have stuck around afterwards for a few days to see the sights. The weather has been lovely (the summer solstice is coming up) and the city is startlingly clean and prosperous. Nowhere I have seen so far could be described as run down – it’s like a whole city made up of the nicer bits of North American cities like San Francisco or Seattle. The people are also really friendly – I lost my Oslo Pass (free entry to museums and public transport etc) and all the people I explained this to were happy to let me enter their museum/bus/whatever without any fuss. And of course everyone speaks fluent English. I forgot my USB cable so my own pictures will be on Flickr early next week when I return. Meanwhile you can satisfy yourselves with other people’s Flickr photos tagged with Oslo.

On the other hand… first there is the weather. Actually it doesn’t get all that cold on average (if you are a Canadian). But there are 148 days under 0C/32F every year on average – and those cold days would be dark as well. And the real kicker is the cost of living. I am staying at a private “B & B” which is little better than a moderately well-decorated hostel (only Special K available for breakfast cereal, you have to wash your hair and body with hand soap as that’s all there is, there are only showers not baths and all of them are shared – you can imagine). It costs £50 a night. Just a main course (no dessert, starter or coffee – I quickly stopped dreaming of them) cost £20-30 at every restaurant I found. (At cafes you could get meals slightly cheaper). A half litre of Pepsi cost £2 everywhere I looked. My two day museum and transport pass cost £30. I could go on…

One of the small ironic pleasures of being a Londoner is going abroad and finding everything less expensive but Oslo was the exception to the rule. It feels even more expensive than Tokyo (mind you I didn’t try buying melons while I was there!)

Nonetheless, I have always been of the opinion that when you go on holiday you shouldn’t
count the cost as it ruins the fun. And I am trying not to! I wouldn’t want to put you off coming either. It is a great, relaxing place to visit as long as you don’t look up the exchange rate before you go…

Wow – at last you can look at the BBC News site statistics in some detail so you can see who reads what (at least for the top ten stories in a given subject or continent – and without exact page views).

Interestingly, the site’s announcement of this feature is in the top 10 even though it doesn’t appear on the front page….

Prospect Magazine has published a little discussion of the jokes that used to circulate in communist Europe which served as an excellent excuse to republish a few of the better ones. Something I didn’t realise:

Stalin himself cracked them, including this one about a visit from a Georgian delegation: They come, they talk to Stalin, and then they go, heading off down the Kremlin’s corridors. Stalin starts looking for his pipe. He can’t find it. He calls in Beria, the dreaded head of his secret police. “Go after the delegation, and find out which one took my pipe,” he says. Beria scuttles off down the corridor. Five minutes later Stalin finds his pipe under a pile of papers. He calls Beria—”Look, I’ve found my pipe.” “It’s too late,” Beria says, “half the delegation admitted they took your pipe, and the other half died during questioning.”

My favourite joke from the article is at the start:

A man dies and goes to hell. There he discovers that he has a choice: he can go to capitalist hell or to communist hell. Naturally, he wants to compare the two, so he goes over to capitalist hell. There outside the door is the devil, who looks a bit like Ronald Reagan. “What’s it like in there?” asks the visitor. “Well,” the devil replies, “in capitalist hell, they flay you alive, then they boil you in oil and then they cut you up into small pieces with sharp knives.”

“That’s terrible!” he gasps. “I’m going to check out communist hell!” He goes over to communist hell, where he discovers a huge queue of people waiting to get in. He waits in line. Eventually he gets to the front and there at the door to communist hell is a little old man who looks a bit like Karl Marx. “I’m still in the free world, Karl,” he says, “and before I come in, I want to know what it’s like in there.”

“In communist hell,” says Marx impatiently, “they flay you alive, then they boil you in oil, and then they cut you up into small pieces with sharp knives.”

“But… but that’s the same as capitalist hell!” protests the visitor, “Why such a long queue?”

It turns out that if you have a GMail address named johndoe@gmail.com, email to johndoe+amazon@gmail.com and johndoe+ebay@gmail.com will also reach you. So follow these directions and you can see whether and by whom your gmail email has been sold on to spammers. If it has been you can simply create a filter that removes any email sent to the new johndoe+ebay@gmail.com address. Of course smart spammers would remove the + part by hand. Also note that a large-ish proportion of email signup forms don’t let you use an address with a “+” in it.

P.S. You may not know that Gmail also (at last!) allows you to create groups in your contacts lists like every other email application in existence (ie you can set up “friends” as an address in your gmail book which sends to John Doe and Jane Doe). It took them far too long to implement this feature…