The stats I have been seeking: a successful paper chase!
Filed under:Academia,Best of blog.org,new authorship,research at3:41 pm

From Local Literacies I found Amateur Arts in the UK which quoted some stats from (Research Surveys of Great Britain & Arts Council of Great Britain, 1991) – see earlier post – and there I assumed the trail would go cold. What chance I could find an obscure 19 year old survey with no Google Scholar entry and a couple of mentions around the web? Yet hurrah! U of Leicester Library had it – a spiral bound report with lots of cross-tabulations in the back that were not discussed in the main text including exactly the stats I wanted! So without further ado, for the year 1991 some stats on proportions of UK adults (16+) and their propensity to write articles or stories but not as a profession.

Education was, unsurprisingly, the factor that made the biggest difference. This chart shows percentages of writers by the age at which they finished education: 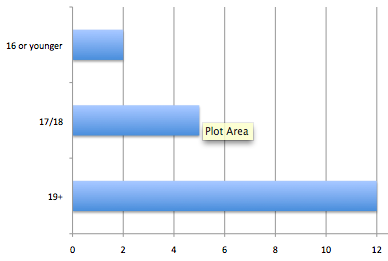 Age seemed to play an important role as well, and not in the way I would have thought. 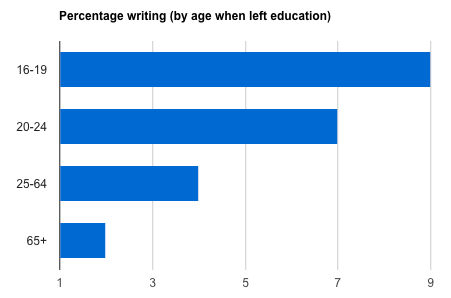 I would have expected an “up-tick” post retirement as people had time to write memoirs etc – though perhaps this is an effect of lower overall education levels of older people.

Region, gender, and disability status don’t seem to have been a factor – nor does being unemployed (though the overall proportion of people writing was low enough that it’s hard to be sure.

Now that I have a baseline for social composition of writers I hope that my future research will be able to see whether the availability of online outlets has changed any of this.