Youth interest in elections on the rise?
Filed under:E-democracy,E-government,Net politics at9:50 am 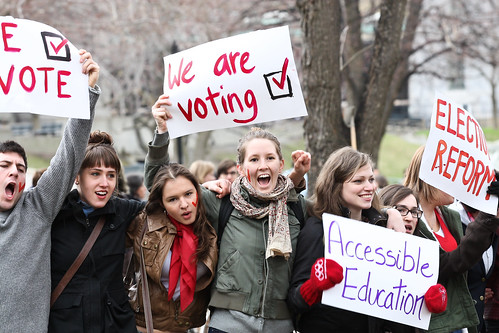 Canada is the latest Western country to find that the youth vote, long thought to be in terminal decline, has in fact been rising. In the run-up to their 2015 elecion there was considerable speculation that Canadian young people had turned out to vote, but proof of the scale of the change has just emerged. Two thirds of 18-24 year olds there voted, compared with 55% in the 2011 election and as low as 35% in the 2004 election (the first where reliable statistics were gathered). This is still, of course, lower than the 77% of the voting age overall who voted (fully 86% of 65-74 year olds voted for example) but is further evidence that there may at last be a shift away from a worrying trend in many western countries of youth disengagement from electoral politics. Similar trends towards higher youth engagement were also visible in the UK as well, in its 2015 election. Nearly six in ten people between 18 and 24 voted then, compared to 52% in 2010 and just 38% in 2005.

The reasons for this apparent shift are not yet clear. Some have suggested that increased use of social media by politicians is helping. Surveys in America after the 2008 election suggested that because young people were more likely to be online, they were also thereby more likely to engage in electorally-relevant online activity.

There has certainly been plenty of social media activity by politicians across the world, though it is hard to pinpoint any social media-led event or talking point that had an impact during the election itself in Canada. Indeed, the most visible impact social media had in the Canadian election is arguably a negative one. Misbehaviour by some candidates – many of them young – on social media led to 12 candidates being withdrawn and at least as many being criticized after the exposure. While it is important that candidates be held accountable for their political views, many of the blunders seem to have been due to jokes in poor taste or intemperate language in their postings rather than deeply held abhorrent beliefs. As I have argued in my book, “Sharing Our Lives Online: Risks and Exposure in Social Media“, there is a real danger that young people will rule themselves out of involvement in electoral politics fearing the exposure of their online pasts by other politicians or journalists.

In the UK if anything the problem seems to be the opposite – despite hundreds of Facebook and Twitter postings by parties during last year’s election, their impact on young people may have been limited because, as Darren Lilleker remarks, “it remains largely a broadcasting tool… they [the parties] use Facebook and Twitter in similar ways to push out messages rather than communicating with their supporters.” Instead of being too personal, they may be not personal enough to really engage with young people.

A literature review by Samara, a Canadian think-tank, suggests finding ways for young people to be involved with the parties they identify with short of full membership could be one way to increase their engagement with formal politics. Reducing the voting age to 16 has been mooted as a way to get young people thinking politically sooner, though making this possible for voting in the UK in EU elections for example was recently rejected by the House of Lords). Of course there is a simple, “brute force” solution, espoused by Martin Wattenberg in his US study of youth disengagement – make voting mandatory. In Canada, the governing Liberal party has said it will be considering this option in its electoral reform programme.

The real answer may be more simple – as Samara found, young people are active in conventional politics when they are contacted directly by parties and party members. Because historically they vote in lower numbers (and because they are harder to target, being mobile and often lacking landline phones) politicians tend to focus their energies and their policies on older people. Some recent anti-establishment politicians on the left like Jeremy Corbyn in the UK and Bernie Sanders in the US have made much of their connections with young people. But it is not clear there are enough young potential voters to enable them to break through and bring the concerns of the young into mainstream politics.