Archive for the 'Current affairs (Europe)' Category | back to home

Apparently they intend to sue if there are any public readings of Joyce’s work (which is still in copyright) during the festival commemorating the 100th anniversary of Bloomsday this June – more details “here”:http://www.ireland.com/newspaper/ireland/2004/0209/2893527271HM3JOYCE.html (registration required). “Cory Doctorow”:http://craphound.com/ is rightly outraged.
thanks to Boing Boing and Lawrence Lessig for the link.

It’s so outrageous that you might almost think it was part of a conspiracy to make the EU’s current copyright stance look foolish.

Isabel Vincent at Canada’s National Post has gone to Kosovo four years after the war and finds it a mess, with ethnic cleansing continuing (of Serbs by Muslim extremists) and drug and people smuggling:

“More than 80% of Western Europe’s heroin comes through Kosovo, where several drug laboratories have been set up, Interpol officials say.”

The sources are more than a little one-sided – anonymous Interpol officials and a lot of data provided by a Serb diplomat (as well as an ex-Canadian ambassador) but it’s certainly not encouraging.

The heatwave in France and what should be done
Filed under:Current affairs (Europe),Personal at1:57 pm

Just for a change I thought I’d give my wife a turn on this weblog – she has just written a piece in this week’s issue of The Lancet analysing why more than 4,800 people died because of August’s heatwave in France and drawing the medical community’s attention to the need for better preventative health measures in such emergencies as well as better care facilities.

[Later – apologies – I didn’t realise only subscribers can read it. FYI she concludes, “often medical and public attention focuses on intervention rather than prevention. However, a heatwave is different in nature from a very hot summer and requires a different approach. Doctors will know how to rehydrate patients but may not think about systematically providing practical tips to prevent heatstrokes. This is a lesson that up to now seems to be relearned with each new crisis.”]

Prospect Magazine has an interesting article – “Europe is Strong”:http://www.prospect-magazine.co.uk/ArticleView.asp?accessible=yes&P_Article=12246 by “Philippe ‘globalization is good’ Legrain”:http://www.philippelegrain.com/ on why you shouldn’t necessarily believe what you may have read about America being the economic powerhouse and Europe being a basket case. Turns out that once you factor in that Europe’s population is not growing while America’s is and Europeans work fewer hours, much of Europe is more productive than the US, hour for hour. I also didn’t realise that cross-border investment within the eurozone quadrupled in the first two years of the Euro.

Thanks to “Crookedtimber”:http://www.crookedtimber.org/archives/000586.html for the link

… Then as I was about to post this up, “Arts & Letters Daily”:http://www.aldaily.com/ led me to a columnist in The Daily Standard who argues the more traditional “neocon anti-Europe case”:http://www.weeklystandard.com/Content/Public/Articles/000/000/003/123ezraq.asp. Neither article alas gives the key detail that would definitely enable me to decide one way or another – what’s the average European produce in an hour, how fast is that rising and how does that compare to the same measure in the US?

I find it interesting that “Irwin M. Stelzer”:http://www.namebase.org/xste/Irwin-M-Stelzer.html (the columnist) argues (correctly) that Europeans may find it difficult to trade less leisure for more income without acknowledging that Americans probably find the reverse even harder to do. I would also like to see the evidence that, “millions of Italians, Irish, Germans, and other Europeans have voted with their feet in favor of America’s balance between work and leisure, with no discernible flow in the opposite direction.” But maybe that’s because I am one of those shirkers who moved from Canada to Britain at least in part because of the work/life balance issue.

Reporters Sans Frontieres reports that “on some estimates” around 30,000 people in China are employed just to monitor Internet usage and censor views. Their report gives a lot of interesting detail on just how and how thoroughly message board censorship is practiced in China.

This week’s edition of On Digital – the radio programme from the BBC World Service – includes a segment on the report.

For more on Internet censorship in dictatorships, check out the recent book “Open Networks, Closed Regimes“. 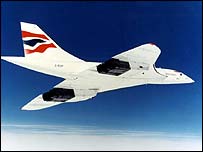 The BBC has reported that Concorde is to retire in October.

I know Concorde is environmentally destructive and noisy but they used to fly over my flat regularly when I lived in South London and I thought the planes were gorgeous. They also remind me of the days (I am too young to remember myself) when people dreamed that one day we would all travel supersonically or by now we’d have colonies on Mars. The dreams might have been unrealistic or even pointless but they were at least ambitious and exciting. As this rather sniffy post-mortem points out, it may be many years before we get to fly supersonic again – even with newer technologies it appears we still can’t make supersonic flight economic.

The EU strikes a blow for online privacy
Filed under:Current affairs (Europe),Net politics,Privacy at10:56 am

Microsoft has agreed to make substantial changes to its “Passport” online identity software (as used by Hotmail and .NET among other MS services) to make it comply more effectively with EU privacy guidelines. As the BBC reports,

European data laws impose significant burdens on those that hold information about customers to try to ensure that it is not abused or stored for long periods without good reason.

The agreement reached with Microsoft means that when Europeans sign up for the service they will be asked to designate themselves as EU residents and then decide how much information they are happy to share with the software giant.

According to the BBC 62.89% of Irish voters have backed the Nice treaty in a referendum meaning preparations to finalise the admission of ten new countries (mostly in Eastern Europe) in 2004 can proceed. It will cost current members a lot over the next few years to help bring countries like Slovenia closer to the European average but in the end if all goes well this will help to form a bloc of more than 500 million well-educated consumers all adhering to liberal democratic values and norms of government.