Archive for the 'social media' Category | back to home

Social reading – how can it work online?
Filed under:new readership,social media at2:28 pm

Kassia Kroser has written an extensive and thoughtful blog post about sustaining book-related online conversations which goes into useful detail about many of the issues. Some of what she has been talking about (having a single place to go to to bring together discussion about a book) seems to be being tackled by the Open Library but while that site links to a few book review sites this still means in order to see a range of readers’ thoughts about a book you have to visit several sites.

To my mind the biggest problem for social reading at the moment is that aside from Amazon (whose reviews are not well-presented and whose database is deficient in a number of ways) there is no single site or service which has built up sufficient scale to act as a ‘one-stop-shop’ aggregator of meta-book commentary in the way that the IMDB for example is the ‘go to’ place to find meta-film commentary and information. Of course if such a space did exist you’d then have the problem of dealing with an effective monopoly – something we are already encountering to some extent with Amazon and online book purchasing – though if the space were owned and run by a consortium of publishers or by a not-for-profit organization then the risks would be less than would be the case if it were run by a single for-profit entity. 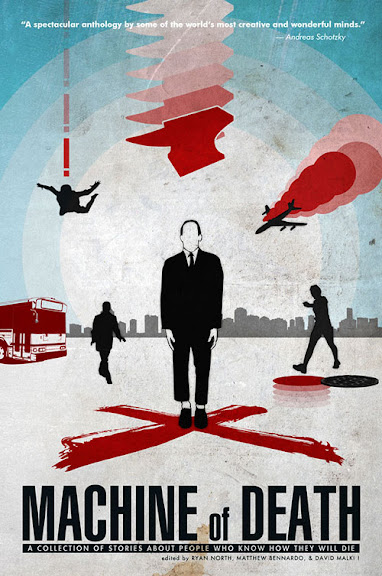 This podcast interview by Jesse Brown with the creator of Dinosaur Comics and this web interview about the brief but dazzling success of a short story collection, ‘Machine of Death are interesting at a number of levels.

Briefly, a group of well-known web comic creators got together and found contributors from among their readers for this short story collection that they would then illustrate. No mainstream publisher would touch it because it didn’t contain material from authors they recognised, so they thought they would self-publish it. And they organized the fan base they had gathered from their web comic activity to buy the book all at once in order to get media attention. It worked and the book hit number 1 for several hours on Amazon US (though as they said it only took “thousands” of sales to do this – it’s now at #1192). A few days later, they released the full text of the book free as a downloadable PDF.

This phenomenon has naturally excited a number of the proponents of “new authorship” models and it is indeed an impressive achievement, but I would add a few cautionary notes to this tale:

Ryan North says he is able to make a ‘comfortable living’ from t-shirt sales driven by his free online comic strip but wouldn’t say how much this amounted to (and his standards of ‘comfortable’ may have been formed by his recent status as an impecunious grad student).

It benefited from promotion by the fan bases of several well-known web comics authors, was promoted on a number of very prominent sites like boingboing, and falls into the sci-fi/fantasy genre. It may even be a great read (I don’t know yet but I have started downloading the podcast). Taken together this constitutes a nearly ‘perfect storm’ in favour of this book.

The broader question for the future of this model has to be how replicable it is. At the moment this is newsworthy – the economic significance of online-driven publication will be proven when tens of thousands instead of (I’m guessing) a few hundred authors can earn enough in this way to afford to bypass the conventional publishing system.

Of course none of this should take away from the fact that even if this is not the start of an economic revolution for new authors it may well be the start of a cultural revolution enabling many more people to become published authors (even if with a rather different notion of what being ‘published’ means). It is this as much as anything else I intend to explore in my upcoming research.

Back in 2004 when Technorati, a blog search engine, started to publish information annually about who bloggers were and what they wrote it was gold, because stats were very hard to find. Now that most internet-related surveys include some mention of blogging, however, the deficiencies of Technorati’s work have become more apparent. This year’s “State of the Blogosphere 2010” report was particularly problematic (or have I just started noticing its problems more?)

1) There’s no unified report as a PDF to store away for future reference or print
2) The statistics they quote seem substantially at variance with what other surveys suggest either about blogging in the US (eg from Pew) and UK (eg from OxIS) or about the numbers of bloggers across the world (eg from the World Internet Project or Universal McCann). Interesting if true but the information about how the survey was done is too vague to be useful. It doesn’t say how people were recruited to take part in the survey and across which countries. The proportions they found from different countries are likely to be simply a reflection of the effort they put in to reaching people in those countries and their familiarity with English.

3) This survey is tacitly a survey of the English-speaking blogosphere not the whole blogosphere but is not represented as such throughout so these figures may be cited as reflecting global blogging while they appear to substantially under-count (for example) blogging in China and Japan).

I wouldn’t complain so vigorously or at length except that:
a) once again this shows how US-based internet companies often discuss the internet as if US behaviour could simply be extrapolated to everyone (something I complained about nearly 15 years ago)
b) A survey of this scale if properly done and with data analysed in detail (or even released to the public for download and reanalysis as Pew and OxIS do) could have been genuinely useful.

The kids *think* they are alright
Filed under:Privacy,problems with technology,social media,Tech Policy Issues at12:50 pm

Trust-e, a private organization which promotes and monitors internet industry self-regulation, has produced a survey of US teens, social networks and privacy it entitled The Kids Are Alright. As its title suggests, its conclusions are broadly soothing. Facebook posted a status update about the report saying that it found “the majority of parents and teens understand how to protect their privacy and think their controls on Facebook are easy to use.” This is not true – it found that the majority of parents and teens believe or state that they understand how to protect their privacy. But as Sonia Livingstone’s work with teens and parents found (for example), teens may have difficulty understanding privacy settings without realising it and parents may underestimate the degree of risk their children encounter.

The trust-e survey did find that 18% of teens, “have been embarrassed or disciplined as a result of a posting”. 48% of parents and 41% of teens also did not agree that Facebook’s privacy settings are clear and easy to use, and the fact that 21% of teens never worry about their privacy when using Facebook should be a cause of concern not celebration. Other stats of note:
10% of parents admitted to secretly logging into their teens’ FB accounts to monitor their use.
10% of teens post things they would not want parents or teachers to see frequently or all the time
8% of teens accept all friend requests