… and even more surprisingly they aren’t charging for it! Deloitte Consulting has provided the Internet community Bullfighter – an add-on for Word 2000 & PowerPoint 2000 (or later) which gives you a rough idea of a document’s readability taking into account its Fleisch index and the number of annoying corporate buzzwords embedded in it.

An interesting (if now old) interview with “Marc Smith”:http://research.microsoft.com/~masmith/ about his work studying the overall dynamics of Usenet news. This form of online discussion is rather ‘old school’ on the Internet these days but it’s still interesting to look at and it lends itself well to the kind of quantitative analysis he performs. You can use some of his tools to search and study Usenet yourself – check out “NetScan”:http://netscan.research.microsoft.com/ for example.

I have never understood why with all the advances there have been in browsers neither Mozilla nor IE has developed a proper database for managing bookmarks. If you have more than a few dozen bookmarks it becomes increasingly difficult to keep track of them all. The “Keeping Found Things Found”:http://kftf.ischool.washington.edu/ project has discovered people can’t find sites they visited earlier but they seem to have developed a needlessly baroque way to deal with this problem. I have been using “Powermarks”:http://www.kaylon.com/ for several years and now have more than 5,000 bookmarks in a simple database which lets me get to any of them almost instantly. It may be the most useful software I have ever bought…

A Powerpoint presentation summarising the results of the first UCLA World Internet Report is “now available”:http://ccp.ucla.edu/downloads/World_Internet_Project_Media.ppt. The main conclusion the media seems to be touting is, “the typical internet user, far from being a geek, shuns television and actively socialises with friends”:http://www.theage.com.au/articles/2004/01/19/1074360689758.html. Now don’t you feel better?

People also don’t buy the argument that the Internet helps people have more of a say on political matters: “Most people do not believe that the Internet gives people more say about what the government does. Only 8.6% of Hungarians agree or strongly agree that by using the Internet people can have more say about what the government does. At the other extreme, 37.1% of Italians agree or strongly agree with this statement” (though this includes people who are not online).

Thanks to Many-to-Many for the links

Perfect post-Xmas gift for the Luddite in your family…
Filed under:Gadgets,Humour & Entertainment at12:31 pm 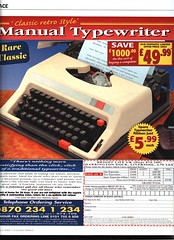 When I first saw this ad in the Weekend Guardian I thought it had to be satirical but no, the ingenious marketers at Bright Life UK (they don’t have a website, oddly enough) have found a new way of unloading a boatload of hideous old typewriters. ‘Save £1000 on the cost of buying a computer’ (actually a quick Internet search finds some which would be £12 cheaper).

But best of all is the appeal to nostalgia – ‘Makes a fabulous gift for all those who remember the good old days’. I remember the days of typing high school essays on a manual typewriter like this and there was nothing fun about it at all. In fact, it was the hassle I experienced then that encouraged me to get an Apple ][ in the first place!

Here’s a topic that continues to run and run. Will Davies compares Internet-mediated ‘democracy’ to the ‘democratic’ governance of, for example, foundation hospitals and warns that the quality of the results depends on wide participation. He also says, ‘any democratic society rests partially on an undemocratic element, such as the US Supreme Court’, suggesting that moderators may keep things running in a similar way in online discussions. While apathy is indeed a barrier to widespread political participation online I think Will understates the importance of the digital divide here as well.

His musings were prompted by Clay Shirky’s oddly upbeat musings implying that the occasions where online polls come up with results that are unrepresentative (as with the Radio 4 “let us shoot burglars” poll) are part of the ‘glory of this medium’.

For the gloomier side of this picture, check out this depressing posting from Dan (ex Up My Street) about how vociferous local racists are taking over that brave experiment in giving local communities a voice. He blames a lack of moderators and the fact no system of user-managed moderation is possible.

Harpers.org. The redesigned site (for one of my favourite print magazines) appears to have a lot more content on it than the old one. Unfortunately:

1) All (or nearly all) of the content seems to be historical (the magazine started 150 years ago)
2) The sites’s design and navigation is more than a little ideosyncratic (though I first read about it via its designer who seems “pleased with his result”:http://www.ftrain.com/AWebSiteForHarpers.html It seems to be designed like a sort of weblog but while weblogs are easy to put material into they can be hard to navigate around if you have a rich variety of material available.

Still, it’s worth having a look at.

If you aren’t an RSS/weblogging geek read no further
Filed under:Useful web resources,Weblogs at2:42 pm

Thanks to a “Bloggie award nominee”:http://www.fairvue.com/?feature=awards2004 and extremely helpful person I have managed to generate rss feeds by category for my site. Her weblog “The Girlie Matters”:http://www.thegirliematters.com/tips/ is also a great source of other ways to tune up a Moveable Type site.

I’ve been wanting to do this for ages. In effect it turns my single blog into 47 different subject-specific blogs! (I really have to sort out a new taxonomy for my posts one of these days)

Another few seconds of fame
Filed under:Academia,Personal at12:53 pm

Today’s Independent runs a short interview with me as part of an article about getting a postgrad qualification (starts about 3/4 of the way down the page). It’s a little more upbeat in what it highlights than I felt I was but otherwise fine.

David Wilcox brings to my attention on Designing for Civil Society an article summarising the benefits of several different open source applications for activists.

Interesting and useful though the list is for some, I do think it shows a narrowness of perspective common to technically-proficient activists. It doesn’t talk about how difficult the software is for the group to install or maintain and doesn’t put much stress on whether there is a free hosted version of the software available (so an organization can just use it without having to install it or run their own web server).

The unspoken assumption of those writing seems to be that at least one person among the activist groups will know how to set up and maintain software and have access to a computer with an always-on broadband connection. Tut tut!