Archive for the 'Gadgets' Category | back to home

I remember this phenomenon from my computer journalism days. I had assumed this was long gone but it’s still around as captured by BBC News Online. Doubly depressing because the CEO of CES seemed to be defending the practice. And triply depressing because I suspect its place at the number one spot of the BBC’s video coverage on News Online at the moment is nothing to do with its critical stance and everything to do with the models being shown to illustrate the story.

Update: And even more depressing than the above – @aleksk tweets i received the worst & most graphic abuse i’ve ever had online when i applauded the ban of booth babes at E3 on Guardian Gamesblog in 2006.

Facing the curse of choice this Xmas – please help!
Filed under:Call for help,Gadgets,Mobile phone and PDA at2:11 pm

Due to recent breakages and having an income after years of studenthood I find myself looking for a bunch of consumer electronics goods at once and I’m coming to realise that:

1) Even in this most-covered commercial area, there are annoying information gaps (products that are UK/European models are much less often-reviewed than US ones).
2) Being able to find reviews of any individual product is no substitute for buyer’s guides that would help you sift through dozens of similar products by your own criteria.

So can you help me find the following?

Digital drought
Filed under:Gadgets,Personal at9:21 am

I’ve been doubly digitally deprived of late – I have lost internet access for three days – that was bad enough. But this coincided with the loss of my new iPod Touch. I hadn’t really realised how much I have come to rely on it as a filler of spare moments with (mostly) speech podcasts, snippets of web pages and the odd game. Also as a note taker and organizer that was – crucially – at hand wherever I was.

I would like to say that now that I have been forced to live without continuous distractions I have discovered the pleasures of living in the moment and being fully aware of my surroundings. But in fact I just find the situation frustrating. Perhaps I need a longer period in a media isolation tank – but as a media studies academic it may be that my media addiction just comes with the territory.

I replaced my five year old PowerPC-based iBook G4 with a practically identical MacBook last week and I know at least one other reader is contemplating the same thing so here are some impressions and a few problems/requests for help.

The price premium for bleeding edge tech is unbearable
Filed under:Digital TV,Gadgets,problems with technology at4:30 pm

By way of background, I have been thinking seriously about switching to Freesat (our house can’t receive Freeview). In addition our DVD recorder appears to be dying, and our TV set is at least 22 years old so it surely has to die soon, which would mean going HD. Knowing that HD is the future it seems silly to buy a new device that only played and recorded at standard definition. So logically a box which offers Blu-ray recording and built-in Freesat recording would be a sensible purchase, since both functions would be useful now or in the future. Imagine my delight when I heard that just such a device was about to arrive here – the Panasonic DMR-BS850. So what would I expect to pay for that? Well the Humax Freesat DVR is £300 and a Panasonic Blu-Ray player starts at £180 or so. I’d expect to pay another £100 or so to be able to record onto Blu-Ray as well but I’d also expect a little cost saving for buying everything in a single box. So maybe they’ll charge £550? Nope – it seems Panasonic plans to charge nearly double that sum for their new gadget. Bah!

I guess what I’ll do is buy a Humax box, possibly a cheap replacement DVD recorder (£130) when this one flakes out and wait for my TV to die and for Blu Ray pricing to become rational…

Really starting to feel the need for a new Mac
Filed under:Broadband content,Gadgets,problems with technology at2:41 pm

Remember I couldn’t get Google Talk to run on my non-Intel Mac? I can’t get the new Mac beta of BBC’s iPlayer to run either (well it runs but it isn’t recommended for non-Intel macs according to the BBC and the frame rate is lousy on my G4).

I just heard about the nabaztag (Armenian for rabbit – hello Leslie!) via Jeremy Hunsinger and though I am not quite sure what it does I am sure I would like to get a “digital pet” like this one one of these days. OK it’s a lot of money for what would probably end up being a glorified alarm clock but smart appliances intrigue me.

The Chumby (below) is more capable and flexible but also somewhat more expensive (and less cute). It’s not distributed here either, it seems. 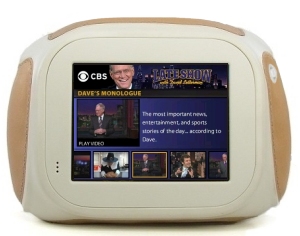 We looked high and low for an MP3 player suitable for a two year old and were only finding ones costing around £30 and over-complicated. Then we found the Sansa Shaker:

Not only is it cutely designed (you can shake it to switch tracks, “shuffle”-like) and simple to use – it has a built in speaker as well as two headphone jacks, runs on an ordinary AAA battery and comes with 512Mb of upgradeable memory (though with only the ability to go back and forth one song at a time that storage is enough for anyone). Best of all, we found it for £10 including postage at 7dayshop – an online store we had not hitherto run across – while other shops were charging £25 and up . It just arrived and appears to be as advertised. Unfortunately for other would-be buyers, 7dayshop no longer lists it for sale. Perhaps their stock’s been bought up by other merchants?

Compare and contrast with the MP3 player I bought five years ago – it had 1/4 the capacity and cost 12x the price!

Evernote doesn’t work nearly as well offline as I had hoped – am sticking with it for the moment out of sheer cussedness but it’s less convenient than my old solution. The iPod Touch update that adds podcast downloading wirelessly which I was also looking forward to doesn’t let you automatically add new podcasts you are subscribed to – it only lets you subscribe to new ones or add podcasts manually (and then only if you already have at least one file downloaded for that podcast). The Touch doesn’t have a built in password protection option for files – how dumb is that? (I’m trying out SplashID Lite as a data store for starters). And the new S2 Skypephone which I am thinking of getting as a cheaper alternative to the Nokia 6220 is all very well but as far as I can tell there’s still no way to sync it with one’s address book using my Mac’s iSync (and my memory of the PC syncing software available with the original Skypephone is that it was dire).

At last a free todo app for the iPod Touch that works offline
Filed under:Gadgets,Mobile phone and PDA,Software reviews at5:21 pm

Evernote, which has had a lot of good press for its note taking/todo application, has finally added offline reading to its feature list for the iPhone and iPod Touch… kind of. It’s feature rich enough that I have switched to using it over the previous work-around I found (using the address book as a todo list) but I’m hoping they’ll upgrade the app more soon.