Archive for the 'Science & Technology' Category | back to home

the existence of everything is currently inexplicable?
Filed under:Call for help,Science & Technology at9:55 am

A recent episode of the almost always excellent Radiolab documentary series ended with a brief explanation by Marcelo Gleiser of how puzzling it is that there is any matter at all in the universe.  As I understood this explanation, energy can become matter as we know, but any created matter also has to create the corresponding antimatter at the same time. Thus, while after the big bang plenty of matter was created, one would expect it all to have been fairly quickly “cancelled out” as it ran into corresponding antimatter and annihilated itself. Except, as it turns out, there is a tiny imbalance in favour of matter when energy becomes matter. Roughly, for every billion particles of antimatter, 1,000,000,001 particles of matter are created, and the entire universe of matter we have today would appear to be as a result of this tiny “leftover” matter.

It seems to me bizarre that a rule of physics which I normally think of as being mathematical and therefore perfectly balanced should have a tiny “flaw”. And, alarmingly, it appears that science does not yet have an explanation for this! Have I misunderstood the explanation given? What is the name of the law or phenomenon that is being referred to? Is there a layman’s guide to it in more detail out there on the web? Or is the phenomenon itself a scientifically disputed one?

Alas I have not yet got a copy of Kevin Kelly’s latest book. I am looking forward to seeing it but not perhaps for reasons he would appreciate. Cory Doctorow says that Kevin Kelly suggests in his new book “humans cannot direct or prevent technology’s course, at least not in the long run”. If this is an accurate summary, then a) it makes a mockery of the subtitle of his book “how technology changes us and vice-versa” (emphasis mine) and b) it makes me want to get ahold of the book and maybe add it to a future course just in order to provide evidence that popular and well-respected thinkers take this point of view, which has been widely criticised in academic circles. In fact “technological determinist” is something of a dirty word (phrase?) in academic discourse. That’s not to say that technologies don’t have their own logics in my view, but they are expressed in different ways in different societies. Mind you I find the opposite, hard social constructivist line controversially laid out by Grint and Woolgar in, for example, “What’s Social about Being Shot?” is equally unpersuasive.

Here’s a brief example of why KK is wrong – why have we taken so long to put wheels on suitcases? Not because the technology to do so did not exist, nor because it would not have been useful. I wager it’s because it took the disappearance of servants and the increase in all forms of travel to make the difficulties in lugging around luggage socially important enough to make people start thinking of alternatives.

If you don’t want to buy “What Technology Wants”, there’s a blog posting by KK that seems to cover this part of his argument here.

via a review of the book by Cory Doctorow at BoingBoing

Thanks to a BBC programme, Costing the Earth, I just heard about Desertec, a proposal to provide 10-25% of Europe’s electricity via solar power panels in the deserts of North Africa. What I thought was particularly impressive is the claim that the solar panels could provide a three-fold benefit for these African nations. They’d sell the power, of course, but they would also get desalinated water (because this is needed to run the power plants) and they could grow crops in the shade of the giant mirrors! I always thought that the problem with remote electricity generation like this would be the losses in transmission over long distances but the people behind this concept claim that by using High Voltage Direct Current (HVDC) these losses would only amount to 10-15% of the power generated.

I have no idea whether this would be feasible, technically, politically or economically, (one critic says it would cost 0.15-0.20 euros per KWh – about double what we pay for power currently) but it sure sounds appealing on the face of it.

(Well, my computer is). A little while ago I heard about Malariacontrol.net, part of the Africa@home project. You download an application (the Berkeley Open Infrastructure for Network Computing – Boinc – available on PC, Mac and  Linux) and instead of donating spare processing power to the quixotic search for extraterrestrial life you can use your computer (when it is turned on but not doing anything else) to help scientists better understand how malaria spreads. Or at least you could until recently – at the moment they have all the computers they need for that project. But keep revisiting Africa@Home as they plan to publicise more projects soon. Meanwhile there are several other projects that use Boinc.

Will the next energy crisis be in the computer world?
Filed under:Interesting facts,problems with technology,Science & Technology at1:25 pm

It seems that while processor speeds are accellerating so are electrical power requirements – at least for servers. This is starting to worry one Google engineer. I had no idea that, for low-end servers, “If we assume a base energy cost of nine cents per kilowatt hour and a four-year server lifecycle, the energy costs of that system today would already be more than 40 percent of the hardware costs.” I had the impression thanks to EnergyStar and similar programmes that overall power consumption was going down on PCs. I guess/hope Google’s servers (which are on all the time, presumably working at full speed and not built to minimise power consumption like laptops) are unusually power-hungry.

New Scientist magazine – a weekly magazine of science news – a bit like The Economist or Prospect magazine for the scientifically-minded – has recently launched a weekly 12 minute Podcast – a great way to catch up on what’s going on in science while you are driving (or cycling!).

I used to be the magazine’s Net Editor ten years ago (!) and I am pleased to see that it is still keeping abreast of the latest Internet trends…

A ‘smart bag’ that tells you when you’ve forgotten something. It’s one of several ‘smart fabric’ applications that have been explored in the bYOB (build your own bag) project at the Media Lab. This kind of thing has been discussed for many years now. I hope they stop talking about them and start marketing them soon – I’m always worrying I’ve left stuff behind when I’m packing.

Toshiba (which makes nuclear power plants as well as laptops – who knew?) has offered to give an Alaskan village a ‘mini-nuke’. It seems they’ll take it – after all it will reduce their cost per kilowatt/hr from 28 to 10 cents (they only pay the running costs). At the moment they get all their power from diesel which has to be barged in during the ice-free months…

The Guardian (back in April) took a peek at the Librie EBR-1000EP which costs c. 220 pounds (only available in Japan at the moment) and sports a 6in screen with a resolution of 600×800 dots at 170dpi, (better than the 70-90dpi of a regular computer display). It’s using the microcapsule display technology pioneered by “E Ink”:http://www.eink.com/ working with Sony and others. 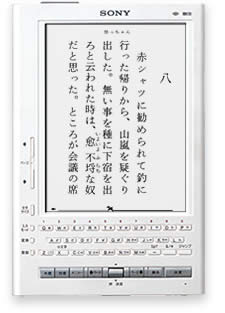 It’s potentially a very exciting development – it’s a pity that according to “a recent review in Fortune magazine”:http://www.fortune.com/fortune/peterlewis/0,15704,685443-1,00.html Sony predictably enough married this potentially revolutionary technology to a boneheaded copy protection scheme.